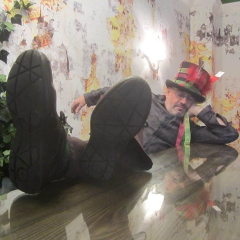 Over a period of nearly half a century, I have given numerous talks and organised many events relating to the life and work of Lewis Carroll. I frequently work with members of the academic world in a range of capacities and am often asked to review scholarly papers and book proposals.

In addition to working on Lewis Carroll, much of my time is spent supporting scholarship in a range of other fields, particularly the history of book illustration.

Editorial Board Member, The Snarkologist: 2021-

The Lewis Carroll Society
(Registered charity no. 266239, as distinct from the current incarnation of the Society, charity no. 1187658.)

More Than Just “an Obscure Writer on Logic”: George Englebretsen’s critical insights into Charles Dodgson’s contributions to the field of logic

Since the early 1970s Professor Englebretsen (Bishop’s University, Québec) has published a number of notes, essays and reviews, exploring aspects of Lewis Carroll’s work on logic. In commemoration of the recent re-publication of these important pieces (Carrollian Notes, 2021) George Englebretsen discusses his work with Mark Richards, offering some critical insights into Dodgson’s contribution to this field of study. This conversation serves as both an introduction to Dodgson’s work as well as an opportunity to explore what makes it unique.

'Lewis Carroll’s Alice and the Brotherhood of Ruralists'

Talk to accompany the "At One with Nature" exhibition, 19 August 2021.

'Reflection, Recursion and Self-Reference: Mathematics, Surrealism and the Mind of Lewis Carroll'

“Outrageously Witty” (someone who clearly knows what they are talking about).

The Lewis Carroll Society of Daresbury, 11 May 2019

'“Till Tears Ran”, An Introduction'

'The Enduring Appeal of Alice'

'Ah, well! They may write such things in a book'

Lewis Carroll: Logic and Philosophy conference at School of Advanced Studies (Institute of Philosophy), University of London
26 May 2017

(The Leg of Lamb, its life and works: Lewis Carroll as Surrealist Lodestar)

'Lewis Carroll the Surrealist: exploring the Wonderland of the Unconscious Mind'

Talk to accompany the exhibition, 'Artists in Wonderland', by a collection of contemporary artists.
Espacio Gallery, London
11 June 2015

A look at some of the more bizarre ways in which Lewis Carroll’s Alice can be linked with the world of fashion.
Alice and Fashion conference, V&A Museum of Childhood, London
9 May 2015

'Alice's Adventures Through the Ages'

'Alice's Journey Through the Ages'

'Curiouser and Curiouser', parts 1 and 2

'Carroll, Yonge and Tangled Tales in The Monthly Packet'

'Why do we still love Alice'

'Inspired by Alice: the enduring appeal of Lewis Carroll's dream-child'

'Alice Illustrated: From Tenniel to the new Golden Age of Illustration'

Opening of 'Tea with Alice' Exhibition

British Society for the History of Mathematics and Oxford University Department for Continuing Edication Conference: Mathematicians and Their Gods
Rewley House, Oxford
16 September 2012

'Alice Illustrated: From Tenniel to the new Golden Age of Illustration'

'The Art of Alice: from Early Illustration to Contemporary Wonderlands'

'Alice After Lewis Carroll: Exploring the Further Adventures of Alice'

Click Here to read a draft version of this presentation

'The Legacy of Lewis Carroll'

'The Hunting of the Snark'

'Lewis Carroll and the Brotherhood of Ruralists'

'Sylvie and Bruno: its value as literature and as a vehicle for Carroll's ideas about life'

'"An Animal That Writes Letters"'

'Lewis Carroll and his Contemporary Poets'

'Even Curiouser: a further collection of Carrollian bits and pieces'

'Curiouser and Curiouser: a collection of Carrollian bits and pieces'

Debate: Alice's Adventures in Wonderland is a book more to be admired than Through the Looking-Glass

The implementation of "executive information systems";

The use of "information" bases in conjunction with "data" bases.

(does not include pseudonymous pieces)

'Untangling the Tale of Hugh, Lambert and Balbus'

In Studies in Illustration, Spring 2019. Published by the Imaginative Book Illustration Society

In The Mathematical World of Charles L. Dodgson (Lewis Carroll)

Published in The Newsletter of the Children's Books History Society

Mathematicians and their Gods

"I have [read the chapter by Mark Richards] and would congratulate him on a thoroughly readable account of Charles Dodgson's progress through life, and why." (Church of England lay preacher).

“Bravo – it is an excellent paper. I have no doubt it will do a lot of good. All future biographers should be required to read it. Your argument is well reasoned (of course).” (Carroll scholar and author of numerous books)

“I have just been enjoying reading your contribution to this book … Excellent! I agree with every word. A very able summary … and your choice of CLD letters etc. absolutely spot on. And such a well considered view of CLD’s mathematics, a much needed corrective to a lot of the adverse criticism we have had to put up with concerning his maths.” (Carroll scholar and author of numerous books)

"... a splendid piece of scholarship and very informative." (Editor of a major work on Carroll)

"Conveys very well the urgent need for people to consider the other things Carroll did, to actually make sense of him and his thought" (PhD candidate, Oxford)

'The Roles of Clubs and Societies'

Published in Studies in Illustration, No. 50, Spring 2011

Published in Jolly as a Snow-Boy. The Life and Works of J.C. Atkinson

Published in The Carrollian, No. 6

'Lewis Carroll and John Colson:
There must be some connection!'

1985. Article about two-way numbering with references to Lewis Carroll

A limited number of complimentary copies are available via http://lewiscarrollresources.net

Guest Co-editor: The Carrollian, No. 30

[Review] Illustrating Carroll and Joyce by John Vernon Lord, The House of Illustration, 2018

[Review] Alice in Manhattan, Photographs by Dan Hirshon
and Two Alice Statues in Central Park by G A Mudge

[Review] Lewis Carroll's Alice's Adventures in Wonderland and Through the Looking-Glass, A Publishing History
by Zoe Jaques and Eugene Giddens

Published in Bandersnatch, No. 157

[Review] The Artist and the Poet: Leonard Baskin and
Ted Hughes in Conversation (by Noel Chanon, 1983)

Published in Studies in Illustration, No. 50

[Review] Mike Batt's The Hunting of the Snark

[Review] Alice Through the Looking-Glass
Illustrated by Peter Blake

[Review] The German Alice: a Bibliography of ‘Alice im Wunderland’
by Pasturny and Wagner

Published in Jabberwocky, Vol 9, No. 1

'There's Something About Alice'

One day conference at the Sussex Centre for Folklore, Fairy Tales and Fantasy
University of Chichester
1 September 2018
Assisting and advising the organiser, Heather Robbins

'Charles, Charlotte and the Camera'

The Lewis Carroll Society and The British Society for the History of Mathematics Conference
Bimingham and Midland Institute, Birmingham
2013
Jointly organised with Robin Wilson

Visit to Freshwater, Isle of Wight

Your message has been sent to Mark Richards

I have a selection of books and ephemera relating to Lewis Carroll in my online shop: Click Here.

You may shop as a "guest", but if you are a student or someone who knows me, I would recommend that you contact me to obtain an Access Code.

I also have the following books available. Contact me if you are interested.
Condition of these is not always great, so I am not looking for a high price and would rather they went to a genuine collector.

Doublets, Second Edition, 1880 (Stains on front cover, inscription and a few marks inside)

Doublets, Third Edition, 1880 (Stains on front cover, bit of foxing here and there)

AAIW illustrated by Willy Pogany, Dutton, 1929, First Edition (Cover has some fraying and stains, the dustwrapper is missing)